Now Reading
The Magnificent Five – All New BMW 5 Series 2017
Contents
1489
by BMW Guide20.10.2017
0
The G30 is based on the same modular platform as the 7 Series (G11). BMW plans to release a saloon- and estate-style plug-in hybrid, the 530e iPerformance, which would have the advanced driver-assistance systems systems found in the 7 Series.
Overview
Model years:

The BMW G30/G31 is the seventh generation of the BMW 5 Series. It was officially announced in October 2016, and sales began in February 2017.

The body styles of the range are: 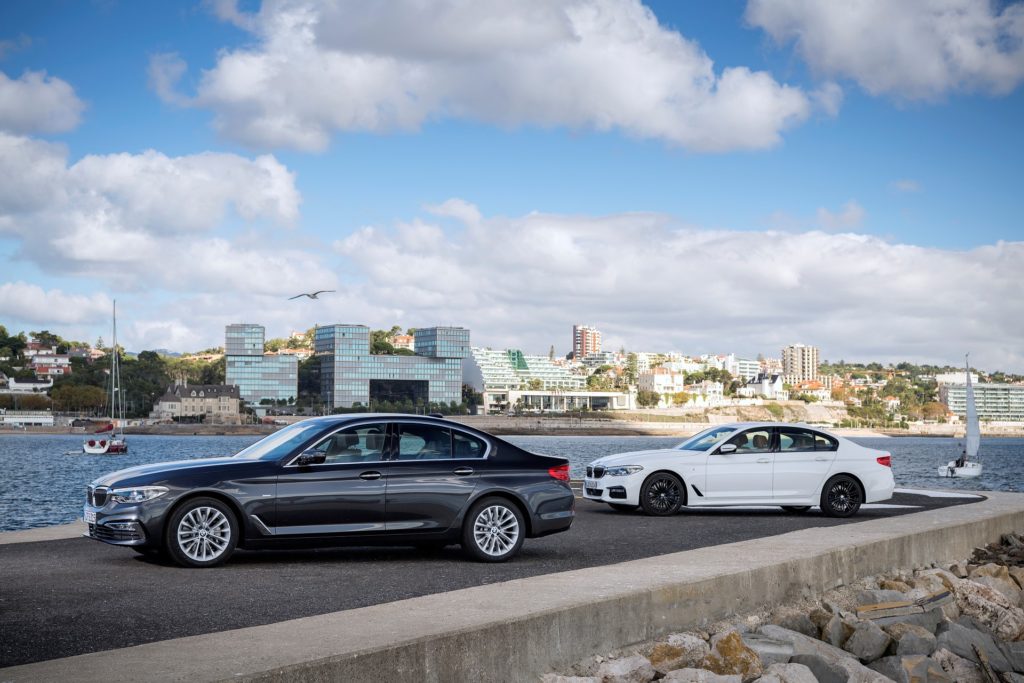 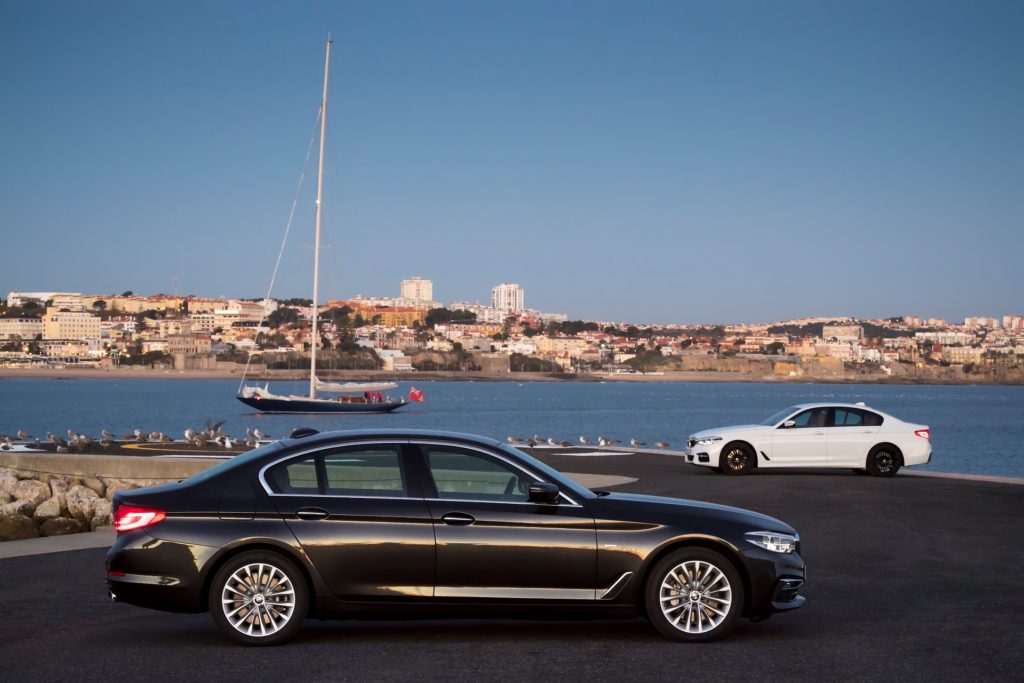 The fastback 5 Series GT model from the previous generation is no longer part of the model range, because it has been moved to the 6 Series model range.

The G30 is based on the same modular platform as the 7 Series (G11). BMW plans to release a saloon- and estate-style plug-in hybrid, the 530e iPerformance, which would have the advanced driver-assistance systems systems found in the 7 Series.

Compared with its F10 predecessor, the G30 includes an updated BMW iDrive system with a higher resolution 10.25-inch display, a new head-up display that covers 70% more area as well as selective anti-dazzle high beam headlights with a range of up to 500 metres. 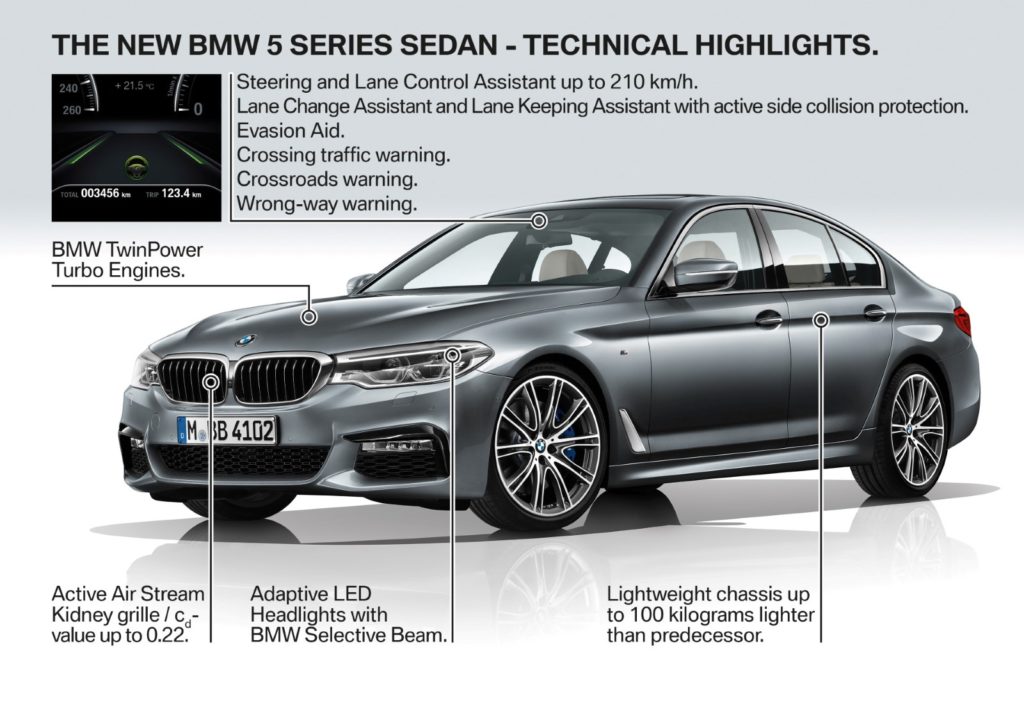 The seventh-gen 5 Series has 7-Series like gesture control, iDrive 6.0 infotainment unit, voice control, and head-up display, and new multi-contour massage seats. BMW claims that the cabin is quieter, due to extensive use of sound-deadening materials.

The G30’s body is made of a mixture of deep-drawing, multi-phase and ultra-high-strength steels, and aluminium. BMW stated the G30’s body had a reduction of 46 kg (101 lb) compared to the F10’s. The G30’s bonnet, boot lid, roof and doors are constructed from aluminium. As a result of these and other weight-saving measures, the G30 weighs up to 100 kg (220 lb) less than its predecessor. 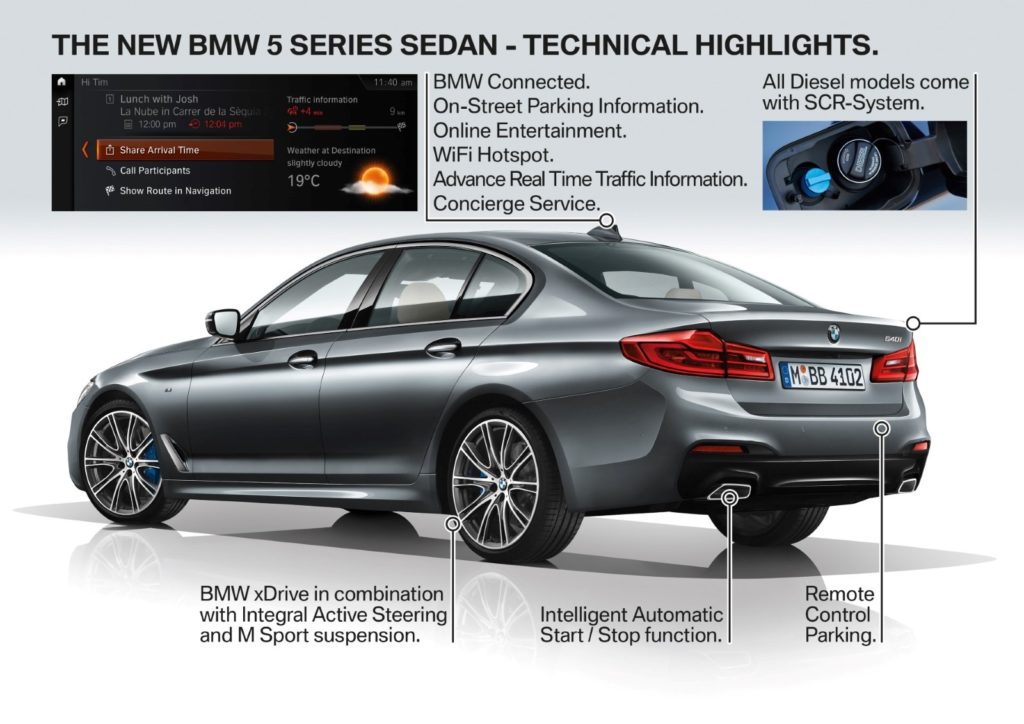 The G30 uses a double-wishbone front axle and a five-link rear axle. Steel springs are used front and rear in the saloon, while the Touring model uses automatic self-levelling rear air suspension.Vehicle damping is performed either by conventional shock absorbers or BMW’s Electronic Damper Control (EDC).

The G30 5 Series has optional electromechanical four-wheel steering, called Integral Active Steering by BMW. For the first time in a 5 Series, this system is available in conjunction with xDrive. 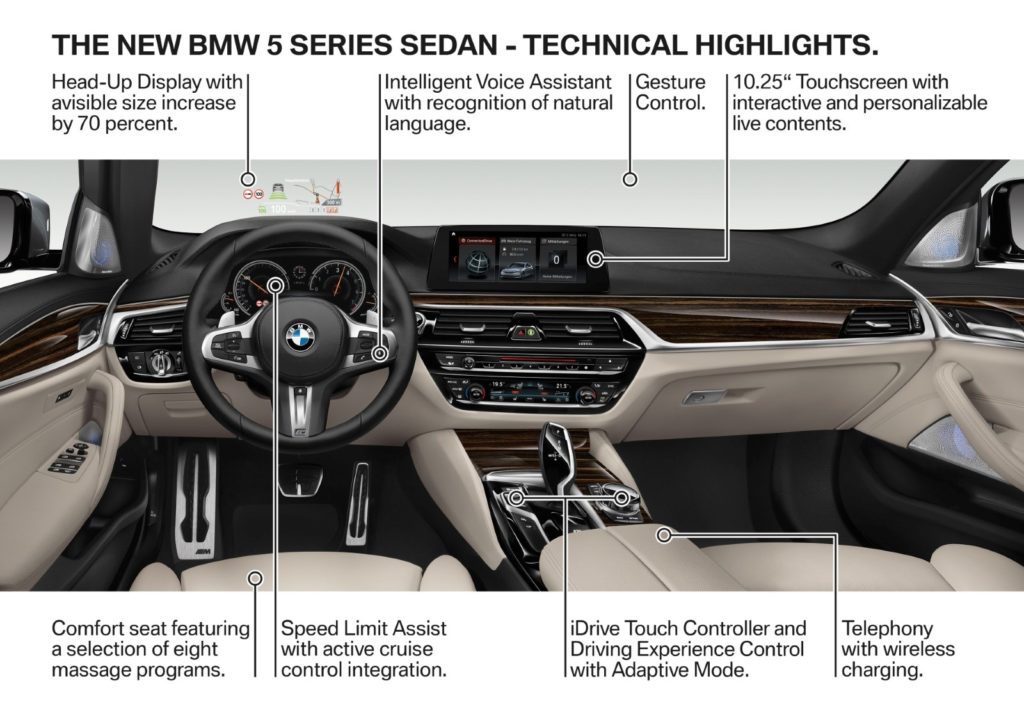 The front grille has shutters that close and open, which according to BMW allows for optimal engine cooling and better aerodynamic flow.

The 5 Series has with BMW’s sixth-generation iDrive vehicle control system, which has four manual input options, including gesture-recognizing controls. This generation electronic architecture has a 48V system in order to allow for the use of a number of autonomous driver assistance systems.

On August 21, 2017 the new F90 M5 was announced. The biggest news about the new BMW M5 is definitely its all-wheel drive system with three driving modes – 4WD, 4WD Sport and 2WD. When it goes on sale in Spring 2018, the M5 will initially be offered in a “First Edition” trim that adds a numbered plaque, 20-inch wheels, red paint and white leather.

The 2017 5 Series is an Insurance Institute for Highway Safety (IIHS) 2017 “Top Safety Pick+”. The Top Safety Pick+ is for ‘good’ IIHS ratings in the small overlap front, moderate overlap front, side, roof strength, and head restraint tests, and ‘acceptable’ or ‘good’ headlights, and for having an option for a front crash prevention system with an ‘advanced’ or ‘superior’ rating.

Figures specified are for European sedans