by BMW GuidePublished: 28.09.2022Updated: 28.09.2022
2432430
Now Reading
BMW M54 Engine – History, Specs and Problems
Contents
The engine is based on the M52TU engine. Among its main differences are the use of a fuel system without a reverse line, a fully electronic throttle and an electronically controlled thermostat.

The BMW M54 is an inline six-cylinder DOHC engine produced by BMW between 2000 and 2006, which replaced the M52 engine. Unlike the previous generation engine, this engine did not receive a TU (technical update) and its specifications remained unchanged throughout the seven years of production.

The engine is based on the M52TU engine. Among its main differences are the use of fuel system without a reverse line, fully electronic throttle and electronically controlled thermostat. Unlike its predecessor, North American models now also have an aluminum block with cast-iron liners.

Like the M52TU, the engine is equipped with the Double Vanos variable valve timing system (Dual Vanos), which controls both intake and exhaust valves, and a separate air intake system called DISA.

In addition, the M54 engine has received a cylinder-type detonation control system and redesigned catalytic converters. When developing this powertrain, BMW aimed to reduce environmental emissions, save fuel, and at the same time increase performance.

Since 2004, the engine was gradually replaced by the BMW N52 engine.

The old and reliable BMW M50 engine laid an excellent foundation for the further development of BMW inline sixes. In contrast to its predecessors, the M54 has an aluminum head and block with thin-walled cast-iron liners. 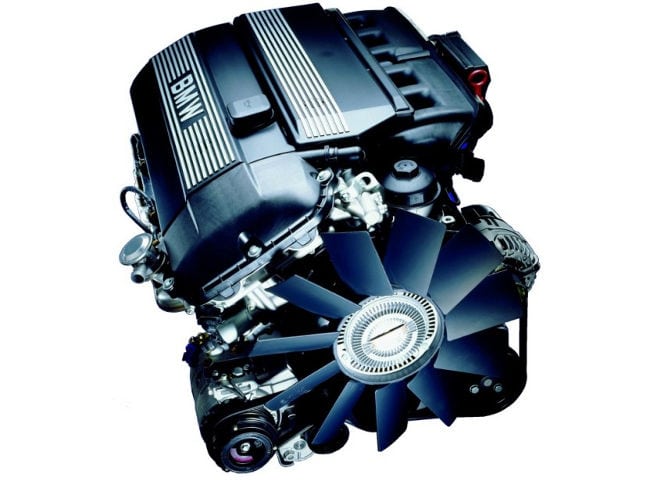 Repair dimensions were returned to the engine, making it more serviceable.

The engine is assembled on a single crankshaft driven by six pistons. Forged connecting rods are used. The timing mechanism uses a chain in combination with two camshafts, which also increases reliability.

The Double VANOS system allows the camshafts to rotate relative to the sprockets depending on engine operation. The inlet manifold is made of plastic and is of variable length, resulting in a higher density of incoming air, which has a positive effect on cylinder filling.

In contrast to the M52 family, the exhaust manifold is shorter, and the air ducts have a larger diameter. The timing system uses hydro-compensators, which allows to eliminate the need to adjust the valve gaps.

There are three versions of the cylinder block, with a displacement of 2.2, 2.5 and 3.0 liters. The difference in volume depends only on the diameter and stroke of the pistons. The timing system provides variable valve opening and closing of the intake and exhaust valves. The engine runs smoothly and quietly. The throttle is controlled electronically. Sharp pressure on the gas pedal informatively raises the tachometer arrow.

Under the hood of the BMW 5-series, the engine is located longitudinally to the axle of the car. Each of the six platinum plugs is provided with a spark from a separate ignition coil, which eliminates unnecessary wires under the hood and ensures steady operation.

A timing chain drive increases engine reliability. The crankshaft carries twelve counterweights and is supported by seven main bearings. The pistons are lightweight with a shortened graphite skirt to reduce friction on the engine cylinder wall. An oil pump and oil pressure regulator are integrated into the oil stabiliser. The weight of the engine is 170 kg. Equipped with a turbocharger, the crankshaft can be cranked instantly. In general, the engine is quite successful and reliable. However, it is demanding to the quality of fuel and oil. Do not forget about the mileage before maintenance. Any shortcomings in operation should be corrected in time, as a minor breakdown can lead to costly repairs. The engine has eliminated most of the shortcomings of previous BMW powertrain models. The Bavarian designers have developed not only a more reliable and economical engine, but also a more environmentally friendly one. 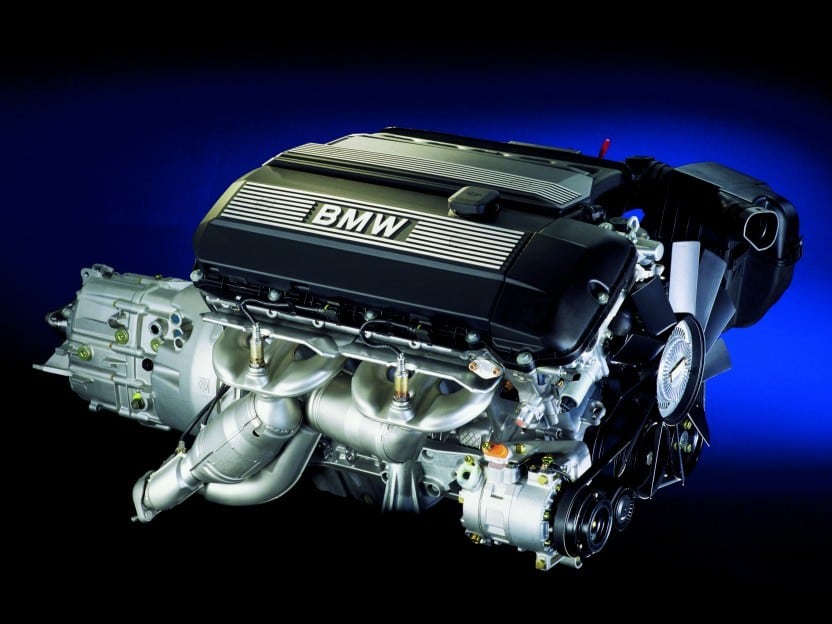 Problems and Malfunctions of the BMW M54 Engines

This engine is considered one of the most successful and successful BMW engines, but nevertheless it is not without the probability of technical problems, the occurrence of which depends largely on the nature of operation and maintenance of the power unit.

Among the most common faults are the following:

Metal pin falling out of the rotary valve

It often happens that there is a rattling knock under the hood of the car, similar to the sound of hydro-compensators. A metal pin falls off one side of the rotary valve manifold length change valve and begins to vibrate inside the damper, creating a rattle. This pin can hardly get into the engine, as it is supported on one side by the manifold wall. Sometimes you just have to insert the pin tightly back into the hole.

Piston rings are not high, so they are more susceptible to coking. And already by mileage of 200,000 km the engine starts to eat oil. Consumption can increase up to one liter per 1,000 km. High oil consumption leads to burn-out of exhaust valves, deposits on manifolds, exhaust system, fouling on pistons.

If there are faults of hydro-compensators, when the engine is cold the valve timing does not close all the way and the control unit registers ineffective operation of a cylinder. Fuel supply to the respective cylinder stops and the engine runs unstable or may stall. Such a disease can be cured by replacing the faulty hydro-compensators for valve clearance.

Another problem with the M54 engine is the crankcase ventilation system with a differential valve, if it ruptures the oil flow increases atrociously. When it freezes, the crankcase gas pressure increases, which can lead to a gasket being pressed out and resulting in oil leaks. Mostly the cylinder head valve cover gasket is squeezed out. Unstable operation manifests itself due to air leakage through the inlet manifold connector plane and the cylinder head. If the intake manifold is not cracked, which can happen, it is enough to replace the gasket.

There can be leaks from the thermostat housing, as it is plastic and will eventually warp and leak antifreeze. Cracks in the plastic engine cover are an unavoidable problem.

Overheating and its consequences

In 100% of cases, overheating will result in crushing of the long aluminum head. If no cracks are found, grinding will restore the flatness of the joint. After overheating, there are problems with thread stripping in the block for the cylinder head mount. You have to drill out, cut larger threads and screw in a socket to match the size of the stud.

Failure of the plastic pump impeller can lead to overheating. When replacing the pump, it is better to choose one with a metal impeller, which is common with some manufacturers.

Despite the many breakdowns, which, in principle, can occur in the engine of any car brand, the M54 is very reliable and repairable. It is only worth remembering about the timing of replacement of operating materials and to look under the hood for visual inspection from time to time. 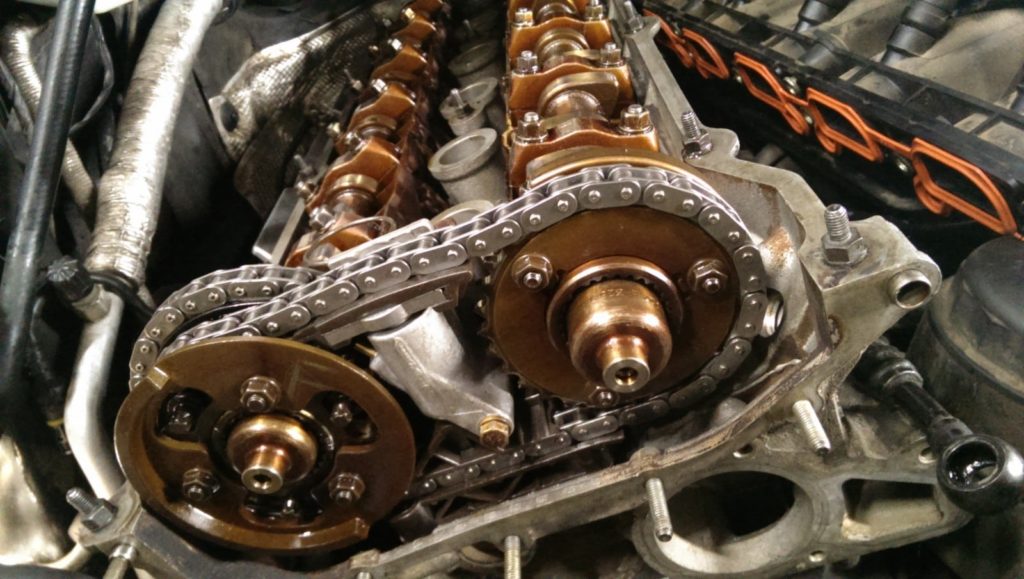 This engine has three versions with a displacement of 2.2, 2.5 and 3.0 liters. The difference in displacement is achieved solely by changing the diameter and stroke of the pistons.

The M54B22 modification was installed on the following models:

The M54B25 modification was installed on the following models:

The top version in the line of M54 engines. In addition to the increased volume compared to its predecessor M52B28, it has also changed mechanically. New pistons were installed, with a shorter skirt compared to the M52TU, and the piston rings were replaced to reduce friction.

It got its crankshaft from the S52B32, which was installed on the M3. The DOHC timing was changed, the elevator was increased to 9.7 mm, and new valve springs were installed to increase lift. The intake manifold was also modified, becoming 20 mm shorter. Tube diameter was increased slightly.

The M54B30 modification was installed on the following models:

Throughout 2001-2003, it was consistently ranked among the top 10 engines available on the U.S. market by Ward’s AutoWorld magazine – Ward’s 10 Best Engines.

likethis
What's your reaction?
Love it
0%
Cool
0%
Unshure
0%
What?
0%
Hated It
0%
Posted In
BMW Engines
Tags
About The Author